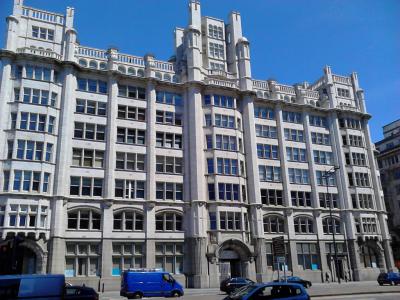 Tower Buildings stand close to the waterfront in Liverpool city centre, directly opposite the ‘Three Graces’ – three grand old buildings which face out across the River Mersey from the waterfront. Tower Buildings has a rich history of its own, with the current structure bearing hallmarks of the first to stand here – a sandstone mansion, built in 1256. This was replaced by the Tower of Liverpool, a fortified house built in 1406. Throughout the 18th century, the building was used as a civic hall and even a prison. Liverpool Corporation bought the site in 1774, but it wasn’t until 1846 that a new structure, the first to be known as Tower Buildings, was built by Sir James Picton.

The current building was completed in 1910, and designed by Walter Aubrey Thomas, a local architect who also created the Royal Liver Building. True to its roots, the building maintained a sandstone effect frontage, and is heavily fortified – it was one of the first buildings in England to be constructed around a steel frame. An office building for much of the 20th century, Tower Buildings were renovated in 2006, and are now a mixture of retail units and private residential accommodation. The original structure, composed of granite laid over its steel frame, with white terracotta tiling, is Grade II listed.
Image Courtesy of Wikimedia and Rept0n1x.