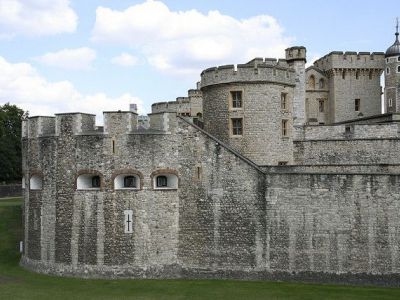 Tower of London, London (must see)

In 1066, shortly after his victory over Harold at Hastings, William the Conqueror began construction of his White Tower. The fortress was strategically placed at a bend in the river Thames, perfect for defense of the river and the city. Its presence was considered a symbol of oppression by common folk. Until 1952 the tower was also used as a prison.

Basically, the Tower is a compound within two rings of walls and a moat. During the reigns of Richard I, Henry III, and Edward I significant expansion occurred. Despite these changes, the general layout of the fortress is roughly the same as it was in the 13th century.

The Tower has been a Royal residence, an armory, a treasury, a menagerie, a mint, a public record archive and the Crown Jewels of England depository. Until the reign of Charles II in the 17th century, coronation processions were made between the Tower and Westminster Abbey. When the monarch was absent the Constable of the Tower ran the show.

The Tower has a reputation for torture and death, but executions were mostly held on Tower Hill, outside the castle. In 400 years a mere 112 offenders faced the block. This was cold comfort to unlucky prisoners. The last prisoners held in the tower were the infamous Kray twins, in 1952.

The castle is made up of three enclosures called "wards." The inmost ward holds the White Tower, the donjon, or keep of the castle. Enclosing the Tower on three sides is the inner ward, built in the reign of Richard I in the late 12th century. The outer ward encircling the castle was built by Edward I in 1285.

The White Tower measures 118 by 105 feet. The battlements are as high as 90 feet. It has three floors. Each floor had three rooms, a large room and a smaller room and a chapel.

The Tower is presently home for the headquarters of the Royal Regiment of Fusiliers. The Yeomen Warders ("Beefeaters") take part in the ceremony of the keys each day. The Honourable Artillery Company fires gun salutes during the year. They fire 62 rounds for Royal events and 41 rounds for lesser occasions.

Six ravens with clipped wings are kept at the Tower at all times lest the kingdom fall. So far this strategy seems to be working.

Tip:
Buy your ticket(s) online and in advance, then print out and skip most of the lines to enter by following the signs for ticket holders.
Join one of the free Beefeater guided tours, lasting some 45 min. These are informative and will give you a good appreciation of the Tower's history. Make sure you walk all round the Tower, as there are fascinating exhibitions in lots of places you may not notice.