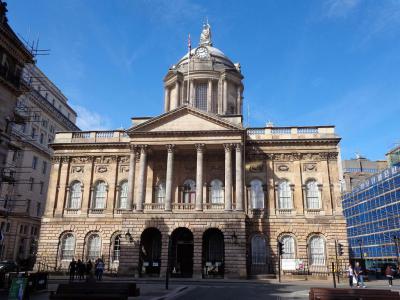 Liverpool Town Hall was built between 1749 and 1754 according to a design by John Wood the Elder. An extension to the north, designed by James Wyatt, was added in 1785. The town hall is built of stone with a slate roof and a lead dome. The building has two storeys and a basement; the stonework of the basement and lower storey is rusticated. The south face has nine bays. Its central three bays are occupied by the portico. This has three rounded arches on the ground floor, and four pairs of Corinthian columns surrounding a balcony. Above the upper storey windows on all faces are panels containing carvings.

The dome stands on a high drum supported on columns. Around the base of the dome are four clock faces, each of which is supported by a lion and unicorn. On the summit of the dome is a statue, representing Minerva. It is a Grade I listed building, described in Images of England as "one of the finest surviving 18th-century town halls".

Why You Should Visit:
Inside, visitors will find the grandest suite of civic rooms in the UK and a magnificent example of late Georgian decoration.
You also might want to go onto the balcony where the Beatles stood when returned to Liverpool.

Tip:
Guided tours inside are available, but check the opening times prior to visit or just take photos from the Castle Street.
Once the main business district, the area is now replete with bars and restaurants, so refreshments are only minutes away/opposite.
Image Courtesy of Wikimedia and Superchilum.
Sight description based on Wikipedia.