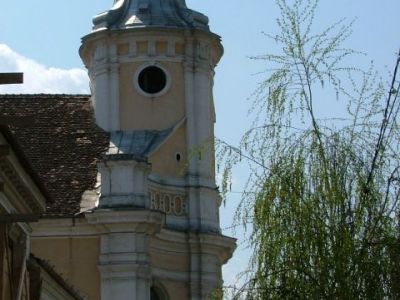 The Transfiguration Cathedral, also known as the Minorites' Church (Biserica Minoriţilor), was donated in 1924 by the Holy See to the Romanian Greek-Catholic Church to serve as the Cathedral of the Cluj-Gherla Eparchy, after the move of the Eparchy's center from Gherla to Cluj. The church and the monastery were built in 1778-79, but the tower collapsed on 24th September 1779 due to mistakes made at the basement level. The design was made by the architect of the Bánffy Palace, Johann Eberhard Blaumann. The tower and the roof of the church burnt down in 1798, and a temporary wooden roof was constructed. The new roof was built only in the 19th century. The murals of the ceiling were painted by Ferenc Lohr in 1908.