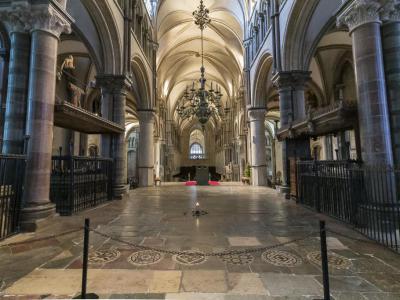 Trinity Chapel is located at the east end of Canterbury Cathedral. It was completed in 1184 as a shrine for Saint Thomas Becket's relics. This site became a popular pilgrimage site.

The popularity of the pilgrimage site inspired Geoffrey Chaucer to write Canterbury Tales in 1387. In 1540, King Henry VIII had Becket's shrine and bones destroyed. Today, visitors will find a lighted candle marking the former site of Becket's shrine.

Edward Plantagenet, the Black Prince, is entombed in this chapel. King Henry IV and his consort, Joan of Navarre, are buried in Trinity Chapel. While most kings are buried in Westminster Abbey, King Henry IV wanted to be connected with Thomas Becket. There are alabaster effigies of the King and Queen on top of the tomb.

The Corona Tower is at the east end of Trinity Chapel. Also called Becket's Crown, this area housed some of Becket's relics. It also housed Saint Odo's and Saint Wilfred's shrines.
Image Courtesy of Flickr and Jules & Jenny.