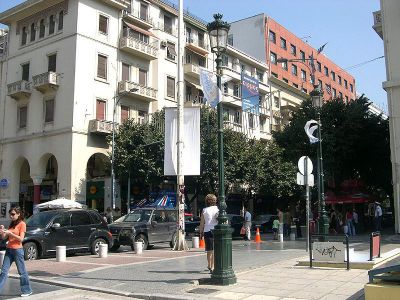 The most prominent features of Tsimiski street are the hundreds of various fashion shops, boutiques, high end international department stores and Fokas, the biggest Greek department store in the city centre. Tsimiski Street is also home to the Plateia Center Mall, the largest shopping mall in the city centre of Thesaloniki, which contains the Plateia Assos Odeon multiplex and has facilities from bars, restaurants, a virgin music megastore to fitness centers. The mall also houses the United States Consulate in Thessaloniki, as well as the liaison office of the Republic of Macedonia.
Image by en:User:Salonica84 on Wikimedia under Creative Commons License.
Sight description based on wikipedia