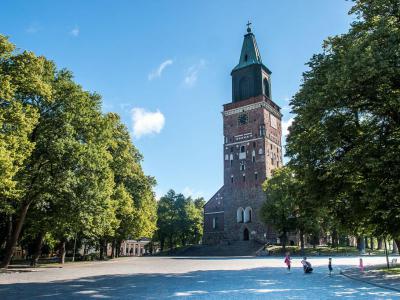 Turku Cathedral is a cathedral of the Evangelical Lutheran Church of Finland. It was first consecrated as a Catholic church dedicated to the Blessed Virgin Mary and St. Henry, the first bishop of Finland, in 1300. It is the only medieval basilica in Finland.

Turku Cathedral is the most important religious building in the country and one of the most recognizable places in Turku. The cathedral was converted from Catholic to Lutheran during the 16th century.

The cathedral showcases Gothic, Romanesque, and Gothic Revival architectural styles. It was built from wood but expanded with grey stone and clay bricks in the Middle Ages. The Great Fire of Turku in 1827 caused extensive damage to the cathedral. Much of the church was rebuilt, including the 330-foot spire.

Some of the most notable people buried in the cathedral are Princess Sigrid of Sweden, Scottish mercenary Samuel Cockburn, Swedish army officer Torsten Stalhandske, Swedish politician Ake Henriksson Tott and bishops Paulus Joosten and Blessed Bishop Hemming. Queen Karin Mansdotter of Sweden is interred in a black marble sarcophagus in the Kankas Chapel.

Turku Cathedral is known for its architectural beauty and its paintings and frescoes. The walls and roof in the chancel are adorned with Romantic frescoes painted by Robert Wilhelm Ekman, a significant Finnish painter. The three organs of the cathedral are also notable. Manufactured by organ builder Veikko Virtanen Oy in 1980, the main instrument has 81 ranks.

The bells of Turku Cathedral chime at noon daily and can be heard on Finnish national radio every noon hour.
Image Courtesy of Wikimedia and Gary Bembridge.