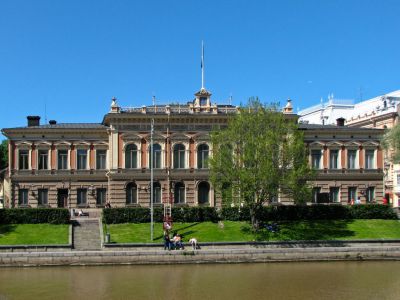 Turku City Hall is a Neo-Renaissance building located on the bank of the Aura River in Turku.

It was originally designed by Charles Bassi from 1810-1811 as the restaurant Seurahuone. The building survived the Great Fire of Turku in 1827. It was redone 1879-1883 as the city hall under plans by F. A. Sjöström.

The first floor used to have the register office of Turku up until 1975 and Turku district court until 1997. After the district court of Turku moved to the new Turku courthouse, the first floor was replaced by work, meeting and legislative spaces in 1999. The second floor of the building is decorated with gold and massive crystal crowning. The wing of the building, located on Aurakatu 4, is for city council groups' rooms and travel agency services.

The public can enter the building during specific events such as Turku Day. The public is also permitted to witness the city council assembly.
Image by Markus Koljonen on Wikimedia under Creative Commons License.
Sight description based on wikipedia