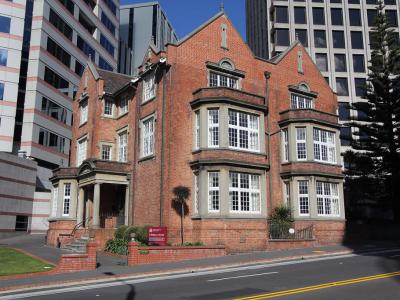 Turnbull House is a historic building in Wellington. It was built in 1915 as the residence of Alexander Turnbull and to house his private library, later bequeathed to New Zealand as the Alexander Turnbull Library. It is listed by Heritage New Zealand as a Category 1 historic place. Turnbull House is situated across the road from The Beehive, and is now completely surrounded by the much larger buildings which form New Zealand's Parliamentary Precinct, including Bowen House, the Treasury Building, Parliament House and The Beehive.

The collections of the Alexander Turnbull Library are in the custody of the National Library and are normally held in its Wellington building. It is charged under the Act to: “Preserve, protect, develop, and make accessible for all the people of New Zealand the collections of that library in perpetuity and in a manner consistent with their status as documentary heritage and taonga” and “Develop the research collections and the services of the Alexander Turnbull Library, particularly in the fields of New Zealand and Pacific studies and rare books” and “Develop and maintain a comprehensive collection of documents relating to New Zealand and the people of New Zealand.”

Turnbull collected the works of John Milton extensively, and the library now has holdings of Milton's works which are "ranked among the finest in the world" and "good collections of seventeenth-century poetical miscellanies and of Dryden material, along with fine sets of literary periodicals."

The House's architecture is a mix of Queen Anne and Scottish baronial architecture and was designed by architect William Turnbull (no relation). The building's design incorporated three large library rooms to house Turnbull's large collection of books, maps, and documents. The outbreak of World War I delayed construction of the house until late 1915. After Turnbull's death in 1918, the house was purchased by the government in 1920 and opened to the public as the Alexander Turnbull Library. The library stayed in the building until 1973 when the collection was incorporated into the National Library of New Zealand.

After many years as a meeting and conference venue, the building was closed to the public in 2012 due to earthquake risk. Investigations have taken longer than expected but strengthening work is intended to be completed before a 2023 deadline.
Image Courtesy of Wikimedia and Jonathanischoice.
Sight description based on Wikipedia.