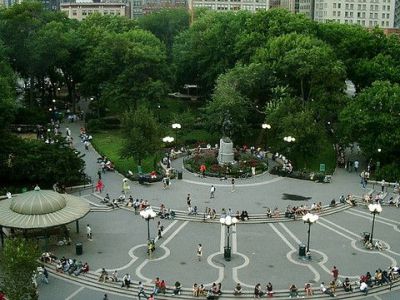 Named so for being an intersection of New York's once two major thoroughfares – Bloomingdale Road (today's Broadway) and the currently extinct Eastern Post Road, Union Square has been the scene of many gatherings (social, political and other) throughout its long history.

In 1831, developer Simon Ruggles, the then owner of the surrounding lands, convinced the city to rename the area as "Union Square" and worked further with the NYC corporation to fence and develop the area, eventually turning it from a triangular to a rectangular form. At first, the place served as an entrance to New York City and was a residential neighborhood. After the Civil War, the area became a commercial hub. Famous rallies took place here including the patriotic rally with a quarter of a million people gathered in support of the Union troops after the fall of Fort Sumter during the American Civil War, and the historic Labor Day March, one of the first workers' demonstrations in the world that inspired workers movements all over the world. More recently, the square was a public gathering point for mourners after the terror attacks on September 11th, 2001.

Why You Should Visit:
Many interesting things worth checking out here, including: the central fountain, subway kiosks, equestrian statue of George Washington, Abraham Lincoln statue, a sculpture of Marquis de Lafayette, a sculpture of Gandhi, plus a year-round greenmarket where you can sample goods from local farmers. It also has several playgrounds, a lively holiday market, and benches you can sit on and watch a slice of New York go by. Cafes and restaurants also abound, so no need to worry about food.

Tip:
Stop by the Union Square station to read messages on the sticky notes left by passers-by, and feel free to leave one of your own!
Image Courtesy of Flickr and bettyx1138.