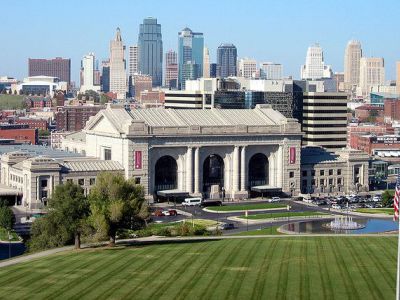 The term "union station" is given to any train depot where passengers can connect between different rail lines. Kansas City is located at a junction between several famous rail lines that were heavily trafficked in the early 20th century, including the Chicago Great Western, Union Pacific, and Santa Fe.

Kansas City's Union Station was built in 1914 and, at its peak, saw over 670,000 passengers pass through annually. Union Station was built to replace the earlier 1878 Union Depot, which had been damaged by flood and had grown too small for the city's bustling growth. Its rail service declined steadily after the 1950s, and it was closed in 1985.

The designer of the beautiful building was Jarvis Hunt, a proponent of the City Beautiful movement. Built in the Beaux-Arts style, it was the third-largest train station in the country when it opened. The ceiling of the Grand Hall is 95 feet tall, with three chandeliers that weigh 3,500 pounds each. In 1999 the station reopened as a museum and public attraction. In 2002, Amtrack began service from Kansas City's Union Station.

Science City is an interactive science city with hands-on exhibits for all ages.

Other on-site attractions include the Regnier Extreme Screen, the largest 3D theater in the area at five and a half stories tall. There's also the H&R Block City Stage Theatre for live shows and the Todd Bolender Center for Dance and Creativity, home to the Kansas City Ballet.

Various museum exhibitions are shown from time to time, and the region's largest planetarium is found here. There are also historical exhibits about the golden age of train travel and a model train exhibit.

- There's a lot to see and do here; make sure to check out the venue's website for current theater and movie screenings and times.
- Don't miss traveling exhibitions that occasionally pass through town.