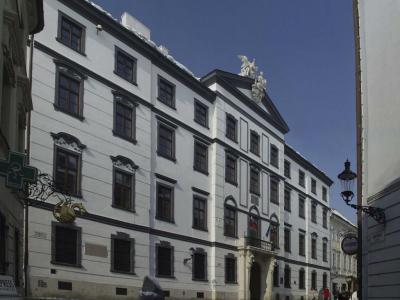 Part of the Comenius University system, the University Library is the largest research collection in the region. The institution was first opened in 1919 and is located in the pedestrian center of the historic part of Old Town, near the old City Hall, Austrian Embassy and St. Martin's Cathedral. Over the years, it has served as a major part of the academic milieu of Comenius University but, it has also served as the national library for Bratislava up until 1954. The library houses major pieces of research including legal, historical, classic and scientific documents. The facility currently holds over 2.5 million publications from Slovak and foreign literature. Because of its academic affiliation, the college has entered into several scholastic associations with organizations including the International Federation of Library Associations and the Association of European Research Libraries. It functions as a dissertation registry, library depository, NATO depository, administrator of Slovak union catalog and conservator of document restoration. The library houses one of the widest-ranging English language collections in the world. It is open to the public throughout the year. Tours are free of charge. However, library services for students and the public have a variety of prices depending on the services required.
Image by Peter Zelizňák on Wikimedia under Creative Commons License.