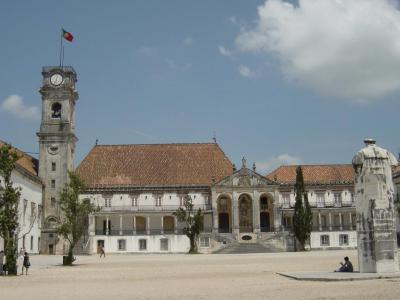 Coimbra University was founded in 1290 by King Dinis. The university moved fitfully between Lisbon and Coimbra until 1537. Then, in the reign of John III, it moved permanently to Coimbra. It was housed in the Alcacova Palace. The palace was subsequently purchased from the Royal Family in 1597.

The library was a gift of King John V. King John could afford it. Gold from Brazil made him the richest king in the world. The library holds 200,000 or more books. In the library are tiny bats that feed on bookworms at night. Bat guano is swept up in the morning by library staff.

The University's crenelated clock tower is 112 feet high. It was formerly used for astronomical observations. It is roofless. Visitors are permitted at the top to get a great view of the city. The clock tower has two bells. One, called "the Goat", rings at 6 pm. The second, called "the Bitch" rings at 7:30 am, waking students for class.

Access to the University courtyard is through the Porta Ferrea ("Iron Gate"), the old gate to the palace. Before entering, one will encounter a stone pavement portrait of the goddess Minerva. She is the goddess of wisdom, medicine, commerce, artisanship, poetry and art. She looks serene, guarding piles of books. She doesn't need bats.

The courtyard, known as Courtyard of Schools, is a vast open area surrounded by buildings of the old campus. There is a statue of King John III. His back is turned to the city. He faces the university. The statues in the courtyard include King Dinis I and Denosthenes offering some words, silently.

Not all parts of the University are open to the public. No more than 60 people are allowed to visit at a time.

Why you should visit
The square offers great views of the city below and access to the original historic buildings, such as the Joanina Library, the Royal Palace, the Chapel and the great Bell Tower.

Tips
Some fees may be charged to visit the buildings. Make tour reservations early. If you climb the tower wear strong shoes.
Image Courtesy of Flickr and Alper Çuğun.