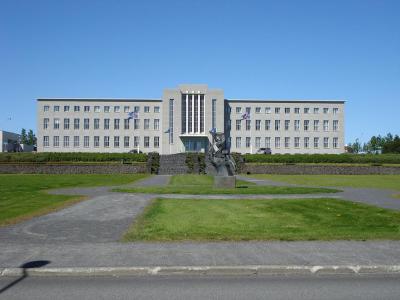 The University of Iceland (Icelandic: Háskóli Íslands) is a public research university in Reykjavík and the country's oldest and largest institution of higher education. Founded in 1911, it has grown steadily from a small civil servants' school to a modern comprehensive university, providing instruction for about 14,000 students in 25 faculties. Subjects covered include social sciences, humanities, medicine, natural sciences, engineering and teacher education. It has a campus concentrated around Suðurgata street in central Reykjavík, with additional facilities located in nearby areas as well as in the countryside.

The University of Iceland was founded by the Alþingi on June 17, 1911, uniting three former post-secondary institutions: Prestaskólinn, Læknaskólinn and Lagaskólinn, which taught theology, medicine and law, respectively. The university originally had only faculties for these three fields, in addition to a faculty of humanities. During its first year of operation 45 students were enrolled. For its first 29 years the University was housed in the Icelandic Parliament building, Alþingishúsið, in central Reykjavík. In 1933, the university received a special licence from Alþingi to operate a cash-prize lottery called Happdrætti Háskólans. In 1940, the university moved into the main building, designed by Icelandic state architect Guðjón Samúelsson. The main building forms the core of the university campus on Suðurgata, where most of the principal buildings of the university are located today. In recent years there has been some major restructuring. In 2008 the university was divided into five different schools.
Image by vestman on Flickr under Creative Commons License.
Sight description based on wikipedia