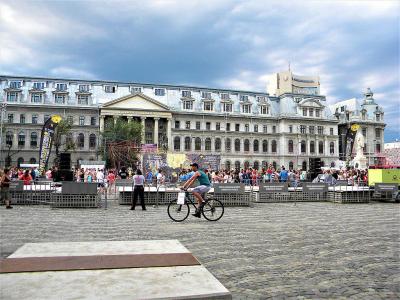 Piața Universității (University Square) is a distinctive part of downtown Bucharest, marking the northeastern boundary of the Old Center, and is located near the University of Bucharest.

In 1679, the Princely Academy was built on the site, which in 1857 was turned into the University of Bucharest. Initially, in the first half of the 19th century, the square bore the name of Ion Brătianu (local politician), whose monument stood in the center. University Square, as such, was established in 1857, as part of the University project run by architect Alexandru Orăscu. The University itself was built in several stages, following neoclassical aesthetic principles. The façade existing today was constructed between 1921 and 1943 by architect Nicolae Ghika-Budești.

Pedestrians now have at their disposal University Passage, constructed during the development of M2 metro line. The space of today's InterContinental hotel and National Theatre was once home to an outdoor circus, surrounded by outlets selling mititei (small sausages), beer and stum. All these disappeared in the 1960s following a gentrification plan seeking to redevelop the area for tourism and to improve cultural and administrative functions.

Between 1968 and 1970, the Hotel InterContinental (one of the tallest buildings in Bucharest) had been erected, along with the new National Theatre, constructed between 1964 and 1973. Damaged during the 1977 earthquake, the theater was rebuilt in 1982–1984.

The square was the site of the 1990 Golaniad, a peaceful student protest against ex-communists in the Romanian government. The demonstrations ended violently when miners from the Jiu Valley were called in by president Ion Iliescu to restore order in the capital.
Image Courtesy of Wikimedia and Britchi Mirela.
Sight description based on Wikipedia.