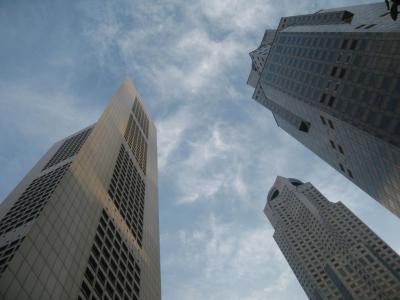 They say that the main reason to visit Singapore's Financial District is to feel like a tiny ant in a canyon of gleaming skyscrapers. To see what things look like from the top of the man-made canyon, the best place to head is the OUB Centre – home to the Overseas Union Bank, which is the complex to the west of the United Overseas Bank Plaza, offering truly amazing panoramic views from its rooftop bar, the world's highest alfresco bar, called 1-Altitude. To the right of the soaring metallic triangle of the OUB Centre are the twin towers of the rocket-shaped UOB Plaza One and the slightly older UOB Plaza Two. Both buildings are connected by a 45 m (148 ft) podium supported by four columns. Also visible from there are the rich brown walls of 6 Battery Road, the sturdy Singapore Land Tower, and the almost Art Deco-style Chevron House.

The adjacent area along the river has been well arranged and is a great place for river views and a walk, surrounded by lots of pubs and restaurants. As in most cities, public opinion is fiercely divided over high-rise architecture, but so far Singapore has been spared the more eye-soaring modern follies that blight other cities. The UOB itself is well known as a patron of local art and takes pride in displaying its collection at their art gallery, so by going during office hours, you may admire the view and paintings at the same time. Fans of surrealistic master Salvador Dali wouldn't want to miss the sculpture named “Homage to Newton”, a typically bizarre work that feels somewhat out of place in a city not known for its appreciation of the hallucinatory.