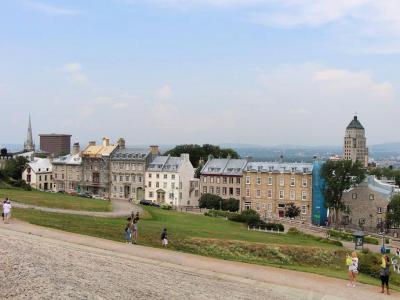 Samuel de Champlain chose the Upper Town as the site for Fort Saint Louis in 1608. It has remained the city's military and administrative centre because of its strategic position atop the promontory of Cap Diamant. Most of the buildings date to the 19th century, although some 17th and 18th centuries remain as well. The area has several commercial streets like Saint Jean, Sainte Anne and De Buade. Some public administration and other institutions in the Upper Town are the Québec City Hall (Hôtel de Ville), the Séminaire de Québec, the Ursulines Convent, and the Augustinian Monastery and l'Hôtel-Dieu de Québec. There are many hotels, including the Château Frontenac, the Old City being a very popular tourist destination. Parks in the Upper Town include De l'Esplanade, Artillerie, Des Gouverneurs and Montmorency parks as well as the grounds of l’Hotel-de-Ville.
Image by Gilbert Bochenek on Wikimedia under Creative Commons License.
Sight description based on wikipedia