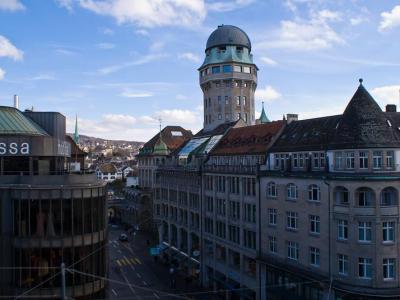 The observatory, or Urania Sternwarte, is named for the muse of astronomy from ancient Greece. The observatory's 50-meter (167-foot) tall tower catches your eye from nearly anywhere in Altstadt (Zurich's historic district). It was begun in 1899 and began service in 1907.

Inside the tower is a Carl Zeiss-designed, two-lens system refracting telescope, giving up to a 600-power magnification. The 5-meter long telescope is installed on a pillar foundation, which goes straight through the buildings to a vibration-free mount below. Although now well over a century old, the telescope is still considered a technical masterpiece. In 2007, for the observatory's centennial, the telescope was entirely restored by Carl Zeiss AG (the company named after Carl Zeiss) in Germany.

Not only will you see the moon, planets of the Solar System, stars, nebulae, and galaxies, but you'll also be treated to a spectacular view of the city. Guided tours are available on Friday and Saturday evenings, and they host special events throughout the year. There's even a restaurant and bar on-site.