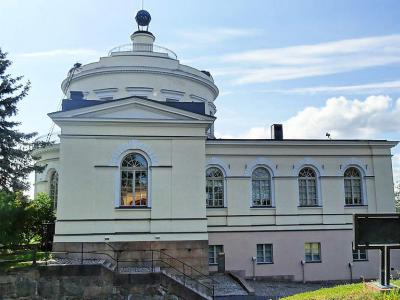 Vartiovuori observatory is the former observatory of the Royal Academy of Turku. Building was completed in 1819 and designed by German architect Carl Ludvig Engel. By its style, the neoclassical observatory is typical work of Engel and it has obvious similarity to Helsinki University Observatory and Pulkovo Observatory (in St. Petersburg, Russia), which are as well Engel's work. Building is located on top of the Vartiovuori hill, close to the cathedral and Aura river and it's well visible from many places in city center.

The observatory and several wooden houses (current Luostarinmäki Handicrafts Museum) on the hill were saved from the Great Fire of Turku 1827. Observatory is famous for a note made by German astronomer Friedrich Wilhelm Argelander:

"Here the observations were stopped by a horrible fire which burn the whole city into ashes but, thanks to God, left the observatory intact".
Image Courtesy of Wikimedia and Markus Koljonen.
Sight description based on Wikipedia.