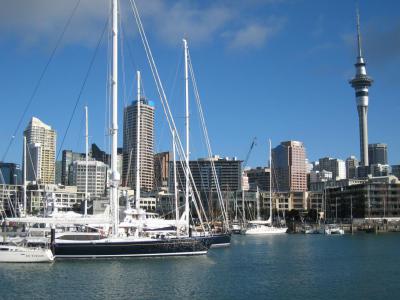 The Viaduct Harbour, also known as the Viaduct Basin, is a part of Auckland’s waterfront that was built in the early 20th century. In those days, as sea liners were getting bigger, they were having trouble entering the docks. In order to avoid having to build new wharves or dredge the harbor, the viaduct was built as a way of anchoring the ships out in the deeper waters and then ferrying the goods on smaller ships to the docks. The shipping companies didn’t cooperate and the scheme was a resounding failure. Times have changed and the formerly downtrodden area is now in demand real estate space.

Redevelopment of the Viaduct Harbour area has led to the construction of waterfront view apartment buildings alongside a new dining precinct in the city. There is a prestigious marina in the viaduct that has space for smaller sailing vessels as well as plenty of superyachts. Throughout the year the marina is a focal point for many high-class regattas and even Auckland fashion week events. Visiting the Viaduct Harbour is a wonderful opportunity to see the grand New Zealand maritime tradition in full swing in its modern incarnation, as well as to enjoy some exclusive dining and shopping.

Why You Should Visit:
With an abundance of restaurants & bars, most of them with lovely views, this harbour is one of the prime areas to enjoy a bite to eat or a refreshing kiwi beer.
It is especially atmospheric during summer evenings when both tourists and locals enjoy al fresco dining as the sun sets.
Great boardwalk to walk around and lots of benches to sit and 'people watch'.

Tip:
You can walk as far up as the Harbour Bridge along the boardwalk or just stay central. Walk to the very end and on the way you may view the Americas Cup yachts, fishing trawlers, and the odd multimillion-dollar superyacht.
Image Courtesy of Flickr and Mark Pegrum.