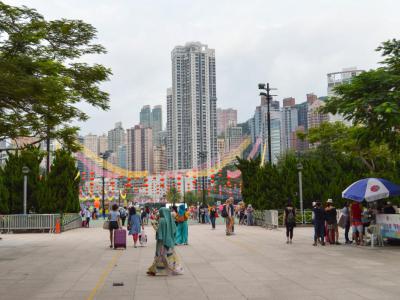 Victoria Park is a public park in Hong Kong furthermore one of Hong Kong's central attractions. The park is named after Queen Victoria of the United Kingdom. It is located in Causeway Bay, on the north of Hong Kong Island. It is part of Wan Chai District, bordered by Victoria Park Road and then Victoria Harbour to the north and Causeway Road and Hong Kong Central Library to the south. The park underwent a major revamp in the early 2000s, which gave it many of its new and rebuilt features, including basketball courts, tennis stadiums, and swimming pool.

The park was formerly a typhoon shelter known as Causeway Bay Typhoon Shelter, part of Victoria Harbour, used as a refuge by fishing boats and yachts during typhoon seasons. In the 1950s, the shelter was reclaimed and the park was built there. The park has long been a gathering place for domestic workers on Sundays, their usual day off.

There is a statue of Queen Victoria, seated, at the main entrance of the park on Causeway Road. This statue was originally located in Statue Square. The park includes tennis courts, a swimming pool, a bowling green and other sports facilities such as the central lawn, basketball courts, football pitches and multiple children's areas and playgrounds.

Every year, in the days preceding Chinese New Year, the park is home to the Lunar New Year Fair (年宵市場), which attracts large crowds late into the night. Other large events in the park include the Hong Kong Brands and Products Expo and the Hong Kong Flower Show.
Image by Francisco Anzola on Flickr under Creative Commons License.
Sight description based on wikipedia