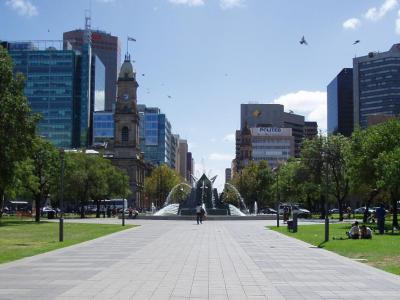 Victoria Square is the central square of Adelaide's five public squares. Also known as Tarntanyangga, the 5.9-acre square was created in 1837 by Adelaide founder, Colonel William Light. It was named by the Street Naming Committee after Princess Victoria. The name Tarntanyangga comes from the aboriginal language of Kaurna. It means "red kangaroo."

The square was originally a simple field with four pedestrian paths. Landscaping was added in the mid-19th century, but it remained mostly unchanged until 1894. At this time, a statue of Queen Victoria was added - the princess had become queen by now. Eventually, a statue of Colonel Light, the Three Rivers Fountain and the Aboriginal Flag were all added.

Victoria Square is surrounded by many of Adelaide's most important public buildings. Some of these include the Supreme Court of South Australia, the Federal Court of South Australia and the Adelaide Magistrates' Court. Historic buildings like the former post office, the Roman Catholic Cathedral Church of St. Francis Xavier and the historic treasury building are also nearby.

One of the most popular traditions in Victoria Square is the installation of an 80-foot Christmas tree each holiday season. It is also a regular spot for political gatherings and community events.
Image Courtesy of Flickr and Amanda Slater.