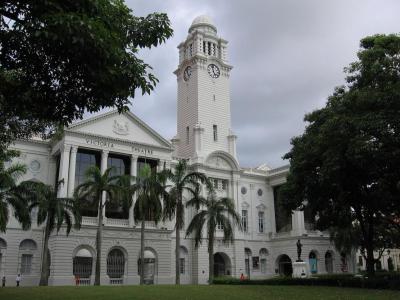 The Victoria Theatre and Concert Hall is a complex of two buildings and a clock tower joined together by a common corridor, located in the civic district of Singapore. On 6 February 1919, which marked the centenary of Singapore's founding, a statue of Stamford Raffles by T. Woolner was moved from the Padang to the front of the memorial hall. The statue was complimented with a new semicircular colonnade and a pool.

In the lead-up to World War II, the memorial hall was used as a hospital for victims of bombing raids by the Japanese forces during the Battle of Singapore before their successful occupation of the colony. During the occupation, the buildings themselves escaped major physical damage, although the colonnade was destroyed, and Raffles's statue moved to the National Museum. After liberation, the hall also served as the venue for Japanese war crime trials.

In 1954, the memorial hall underwent renovations by Swan & Maclaren, and on 21 November, it was the venue where the People's Action Party was founded. The town hall was also internally restructured to allow air-conditioning and soundproofing to be added, and was eventually converted to the Victoria Theatre. In 1979, the memorial hall was renovated again to accommodate the Singapore Symphony Orchestra (SSO), upon which it was renamed the Victoria Concert Hall.
Image by Sengkang on Wikimedia under Creative Commons License.
Sight description based on wikipedia