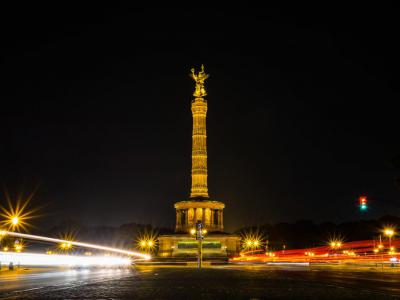 The Victory Column was designed in the 1860s to commemorate the Prussian victory in the Danish-Prussian War. By the time it was inaugurated in September 1873, Prussia had defeated both Austria and France; thus, the column was given a new purpose, with these later victories in the so-called "unification wars" having inspired the addition of the bronze sculpture of Victoria, 8.3 metres (27 ft) high and weighing 35 tonnes. Berliners have given the statue the nickname Goldelse, meaning something like "Golden Lizzy".

Frequently part of the route for marches and parades, the column – a Berlin landmark – is also accessible to pedestrians through four underpasses, which are actually extremely useful since there is lots of traffic going around. Via a steep spiral staircase of 281 steps, the physically fit may, for a fee, climb almost to the top of the column, to just under the statue and take in the views over the Tiergarten and the radial roads leading off the roundabout.

With statues, free bathrooms, and idyllic ponds interspersed with benches around, the expansive Tiergarten is Berlin's most popular inner-city park. Often described in guide books as a summer destination, it provides a pleasant ramble in the city center all year round. On a beautiful day, it is easy to spend hours wandering around or spread out on some blankets for a picnic. There are lots of trails for running and biking, or you can hire a pedal bike service to ride you through the park. Definitely worth a visit to relax!

Tip:
Also worth seeing, if you are in the park at (or after) dusk is the Open-Air Gas Lantern Museum close to Tiergarten S Bahn station, and comprises of 100 gas lanterns.
Image by Davis Staedtler on Flickr under Creative Commons License.