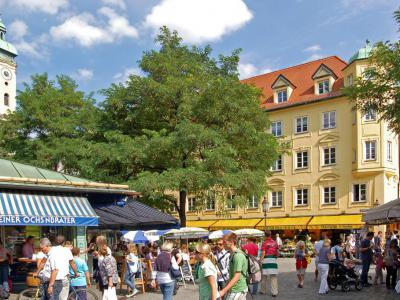 Lying just a few meters away from Marienplatz, Viktualienmarkt is an open-air daily farmers' market.

The very first centralized marketplace in Munich was Marienplatz. As the city grew richer and expanded, the square proved too small for the growing shopping demand. In the early 19th century, King Maximilian of Bavaria decided to demolish the nearby Heiliggeist charitable hospital to clear space for the market. At that time the square was called Marktplatz. The name was later changed to Viktualienmarkt, with “Viktuel” being the Latin word for food. With this came new halls and separate pavilions for fish, fowl, meat and bakery items.

The World War II bombings almost completely destroyed the market. Rebuilt after the war, it had the fountains and decorative elements added to make it more attractive. Presently, Viktualienmarkt comprises over 140 shops selling gourmet food, exotic fruit, cheeses, pastries, sausages and venison. Folk events, like dances, music performances, Brewer’s Day, Gardener’s Day celebrations, a special event marking the opening of the asparagus season, a summer festival, and the Shrove Tuesday dance of the Market women, take place here throughout the year. As of 1975, it has been a pedestrian zone and a popular gathering spot for locals and visitors.

The Beer Garden in the center of the market is a nice place for a break under the shade of chestnut trees. The place can sit up to a 1,000 people at a time and offers sumptuous Bavarian specialties, like the potato salad, pork roast and homemade cheese in abundance, in addition to good Bavarian beer, of course. The place is open from 9am to 10pm in the summer, and from 9am to 6pm in the winter, staying closed on Sundays and holidays.
Image Courtesy of Flickr and Pixelteufel.
Sight description based on Wikipedia.