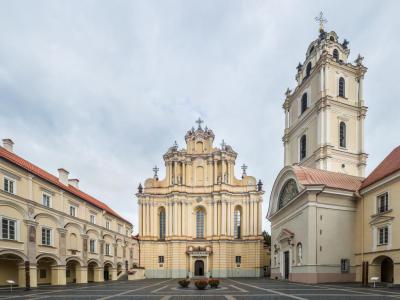 The university was founded in 1579 as the Jesuit Academy (College) of Vilnius by King of Poland and Grand Duke of Lithuania - Stephen Báthory. It was the third oldest university in the Polish-Lithuanian Commonwealth. In the aftermath of World War I the University saw failed attempts to restart it by Lithuania (December 1918) and invading Soviet forces (March 1919), and finally resumed operations as the University of Stefan Batory in Poland (August 1918), a period followed by another short Soviet occupation in 1920, and the less than two year period of the Republic of Central Lithuania, annexed by Poland in 1922. After Lithuania regained its independence in 1990, following the dissolution of the Soviet Union, it resumed its status as one of the prominent universities in Lithuania as Vilnius University.
Image by Brunswyk on Wikimedia under Creative Commons License.
Sight description based on wikipedia

This sight is featured in a self-guided walking tour of Vilnius, Lithuania within the mobile app "GPSmyCity: Walks in 1K+ Cities" which can be downloaded from iTunes App Store or Google Play. Please download the app to your mobile phone or tablet for travel directions for visiting this sight. The app turns your mobile device to a personal tour guide and it works offline, so no data plan is needed when traveling abroad.

The architecture of Vilnius is very beautiful and diverse. Europe's greatest architectural styles such as Gothic, Renaissance, Baroque, and Neoclassical blend perfectly in the capital of Lithuania. Visitors will instantly recognize such landmarks as Gate of Dawn, Gediminas Tower, and Presidential Palace.