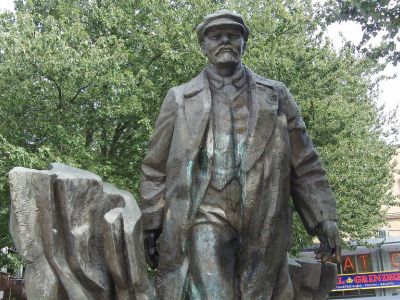 Fremont embraces the freedom to be peculiar, and in keeping with that theme, here is one of those head-scratching things you will run into when strolling around, that gives the neighborhood all its character: a larger-than-life Soviet statue of Lenin; an actual Cold War relic that is now centrally located on N 36th St, near some very awesome restaurants.

The 16-ft, 7-ton statue formerly stood in Czechoslovakia, where it eventually got toppled as a result of the Velvet Revolution. A Seattle-area man, now deceased, who admired it as a piece of art and for its historical significance, bought it and had it shipped to the U.S. in 1993. The bronze creation still belongs to his family and is technically 'for sale' for $300,000.

While other statues portray the Russian communist revolutionary as a thinker and philosopher, this rather unique sculpture depicts him as marching amongst chaos, flames and symbols of war. On recent pass-bys, people have frequently noted that his hands have been painted blood-red. Understandably, some people hate the guy, but then again, art is supposed to make you think, and bumping into Lenin in Fremont surely does that. Plus, he gets dressed up regularly, as do other sculptures, for things like Gay Pride Week or the Solstice Parade. Some will even put Santa hats on him at Christmas!

Why You Should Visit:
Still one of the best photo ops around – something you won't see everyday. Different from a cookie cutter-grade Lenin, this was made by a well-known Bulgarian sculptor and brought from Eastern Europe, so it's a legit piece of Soviet history.

Tip:
Check out the plaque describing both the history of the statue and Lenin himself – it is more informative than you'd expect.
Image Courtesy of Flickr and gavin_lees.