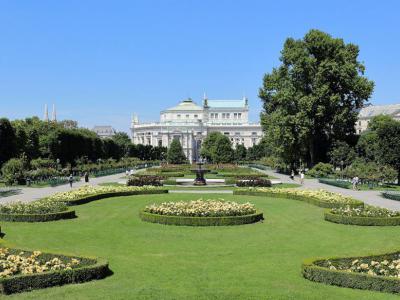 Volksgarten (or the "People's Garden") is one of the most beautiful public outdoor places in Vienna. Located in the Innere Stadt, it was built over the top of the part of the city that was destroyed during the reign of Napoleon. The venue was finished and first opened to the public in 1820.

Volksgarten owes its fame largely to the gardens inside, especially the rose section. There is also a very famous temple here, called the Theseus, replicating the eponymous famous Greek original. Peter von Nobile built the monument in 1823 as a tribute to Empress Elisabeth of Austria.

Much of the park, as it is known today, was built at a second addition to the place in 1857 when more of the city was turned over to this use. A famous coffeehouse was also located here for a while, which ultimately became a venue for concerts from the likes of Straub and Lanner, the two very famous Austrian composers. Many a concert are performed at the park to this day.

Why You Should Visit:
A park to rival any with its rich tree canopy, rose gardens and benches placed throughout.
Very cozy and lovely place to sit down and have a rest or a little picnic.