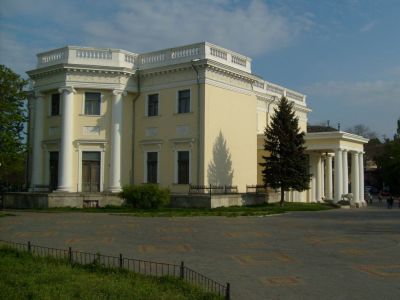 The Vorontsov Palace is a 19th century palace and colonnade located at the end of the Primorsky Boulevard pedestrian walkway. The buildings were built between 1827 to 1830 by the Sardinian-born architect Francesco Boffo for Prince Mikhail Semyonovich Vorontsov, one of the governor-generals of the Odessa region.

Vorontsov chose to build his city palace on the spot where the former governor general Richelieu's humble house had once stood. Vorontsov was so impressed with Boffo's work, that he contracted Boffo to design the Potemkin Stairs. In 1906 it became an engineering school. In 1917 it was the headquarters of the Soviet Red Guards, and in March 1917 the first Soviet of Workers' and Sailors' Deputies met in the building. In 1936 the Vorontsov Palace was acquired by the Young Pioneers, and renamed the Children's Palace.

The present day palace is only the front part of the original structure, the less valuable part of the complex, the Orlov wing was torn down. The Orlov wing was mainly apartments and outbuildings —nicknamed the "Orlovsky outhouse", it stretched from today's Mother-in-Law's Bridge.

In the second-half of the 20th century, the palace has had two fires. In 1994 sculptor Mikhail Reva built a fountain called "Day and Night" in the courtyard. Unfortunately, the fountain hasn't had any water since 1999.
Image by Garik 11 on Wikimedia under Creative Commons License.
Sight description based on wikipedia