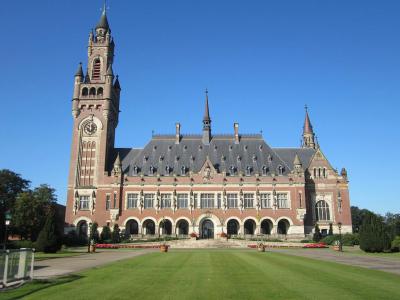 In addition to hosting these institutions, the Palace is also a regular venue for special events in international policy and law. The Palace officially opened on August 28, 1913, and was originally built to provide a symbolic home for the Permanent Court of Arbitration, a court created to end war which was created by treaty at the 1899 Hague Peace Conference.

The building is in the Neo-Renaissance style which was designed by French architect Louis M. Cordonnier. The palace initially has one big bell tower in front and one small one in the back.

The Palace is filled with many gifts of the different nations who attended the Second Hague Conference as a sign of their support. Among the gifts are a 3.2-tonne (3.1-long-ton; 3.5-short-ton) vase from Russia, doors from Belgium, marble from Italy, a fountain from Denmark, wall carpets from Japan, the clock for the clock tower from Switzerland, Persian rugs from Persia and wood from Indonesia and the United States of America.
Image by Peegmehh on Wikimedia under Creative Commons License.