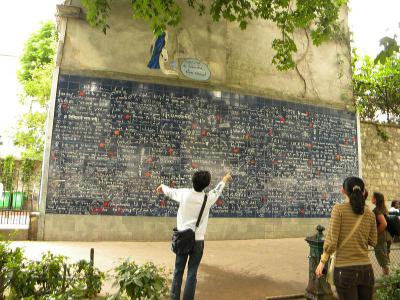 Paris is regarded as one of the most romantic cities in the world so it should come to no one's surprise that there is an attraction dedicated to love – simple but very effective and a nice change from old monuments and buildings.

The Wall of Love is a love-themed wall of 40 sq m (430 sq ft) in the Jehan Rictus garden square in Montmartre. The wall was created in 2000 by calligraphist Fédéric Baron and mural artist Claire Kito and is composed of 612 tiles of enameled lava, on which the phrase 'I love you' is featured 311 times in 250 languages.

The Wall of Love has since become a popular site for romantic occasions including proposals, engagement, wedding photo shoots, and everything else related to love. The surrounding small park has plenty of vegetation and benches to sit down for a rest. On frequent occasions, you will see band playing live music next to the wall, too.

Tip:
The red splashes on the wall symbolize parts of a broken heart. See if you can piece them back together to form a full heart.