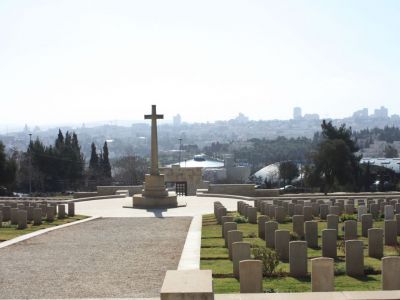 The War Cemetery on Mount Scopus is a final resting place for fallen servicemen of the British Commonwealth during the Palestine campaign of 1917. The first real attempt of making a unified approach at burying the dead who had fallen on foreign soil, it contains the graves of 2,515 Commonwealth service personnel (including 100 unidentified), a number of whom were removed from at least 7 other cemeteries in the area where they could not be maintained. Units from Australia, New Zealand, India, Egypt, South Africa and the British West Indies are also represented besides those of the UK. A small number of German and Turkish dead also are buried at the cemetery, and a small Jewish section is near Plot 'N'.

The cemetery also contains the Jerusalem Memorial to 3,300 Commonwealth service personnel who died on operations in the same war in Egypt and Palestine and have no known grave. This Memorial incorporates a chapel with a mosaic that was designed by Robert Anning Bell.

The grounds are immaculately kept and the simple burial stones make the stark reality of war very real. The stones have the name, age and the date of the soldier's death inscribed, along with the unit insignia.

Visitation is free and open to the public 24/7 (just for your consideration, try to visit during the day).
Image by Adiel lo on Wikimedia under Creative Commons License.