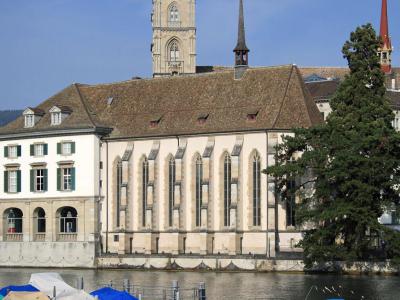 The Water Church is another church with a long history in the city. The first mention of the church goes back to 1250. It was constructed on a small island in the Limmat River. The first church on the site was built in the 1100s and was reconstructed at various times. It was completely reconstructed in 1486.

During the Reformation, the church was seen as a place of idolatry. The Reformation leader turned it into a secular use, specifically a library. In 1634 the church became the first public library in Zurich. In the 1800s, the island was connected to the riverbank. In 1917, the library that was housed in the church merged into the Central Library and the empty church became a place for storing crops.

In the 1940s, together with reconstruction work, some archaeological excavations took place. After the 1940s renovations were complete, the church building went back into religious use, specifically as the Evangelical-Reformed State Church of the Canton of Zurich.

Aside from its long history, the church is also known for standing on the site of where it is believed that two Patron Saints, Felix and Regula, were executed in the Middle Ages. Felix and Regula were siblings and members of a Roman military unit. Legend has it that Felix and Regula refused to particulate in the persecution of Christians. The Water Church site is where they were decapitated.

Why You Should Visit:
Hushed and intimate – a space for rest or meditation in the middle of an active day.
The Giacometti windows are a highlight, as is the crypt below.

Opening Hours:
Wed-Fri: 12-3pm; Sat-Sun: 12-5pm
During church services and other occasions, no visits are possible.
Image Courtesy of Wikimedia and Roland zh.