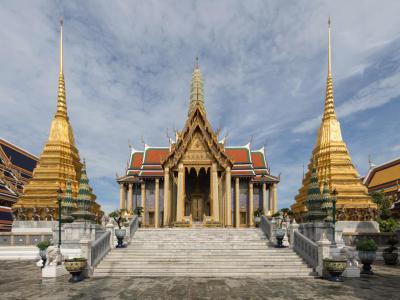 Wat Phra Kaew, commonly known as the Temple of the Emerald Buddha, is located on the ground of the Royal Palace in Bangkok. It is the most respected Buddhist shrine in Thailand, and is so primarily for the 2-feet tall dark green statue, known as Emerald Buddha, housed in the temple.

Some historians believe that the Emerald Buddha was brought from Sri Lanka, while others reckon it was crafted in Thailand in the 14th century. An associated legend suggests that the statue was once hidden, covered in plaster, inside a monument in Chiang Rai until, in 1434, a lighting storm revealed the Buddha image underneath.

In the course of history, several wars have been fought because of this Buddha image. It was brought to Bangkok in 1782 and has since been considered a talisman of tremendous significance for Thailand. Together, Wat Phra Kaew, the Temple of the Emerald Buddha, and the adjoining Grand Palace form, perhaps, the greatest attraction of Bangkok well worth looking at.

Why You Should Visit:
The Grand Palace is already something unique and amazing; the Temple of the Emerald Buddha is like a cherry on top of a beautiful cake.

Tip:
Visit when the doors open, around 8am, to avoid crowds; come dressed appropriately (no exposed knees or shoulders), and enjoy a walk around.