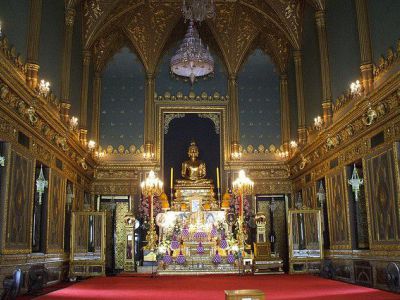 Wat Ratchabophit is a royal temple located near the Ministry of the Interior and the Grand Palace of Bangkok. The full name of the temple is Wat Raja Bopits Athitma Hasimaram, which means “Temple under the Royal Construction with the Great Sacred Boundaries”. Being the last temple erected by King Rama V in the late 19th century, it features both traditional Thai and new European elements with some distinct Gothic features, and is distinctly one of the most beautiful temples in Thailand.

The entire compound of the Wat holds a cluster of buildings – the ordination hall, Phra chedi, the wihan in front, the circumambultory gallery and small open pavilions standing in row or on sides – sheathed with marble and placed on elevated bases within the surrounding wall, one meter high, decorated with glass Chinese tiles of five colors, designed by Phra Achan Daeng, a well-known artist of King Rama's period.

The wihan is similar in architectural style to the ordination hall, except for the richly carved wooden door and window panels. It houses “Phra Prathip Warothai”, a seated image of Buddha displaying the "subduing Mara" gesture, and three cabinets holding the Tripitaka carved on palm leaves.

The living quarters of the monks and temple workers is on the south side. There is also a Chinese-style building nearby that used to accommodate kings during their stay at the temple. Also nearby is a storage area for disused Buddha images. A burial ground with small monuments and neat paths is present on the west side. Some of them were built by King Rama V, while others - by the royal members in later periods. Designed in different shapes, such as chedi, prang and wihan, these buildings are also patterned in different architectural styles – Thai, Khmer and Gothic.

Surprisingly enough, despite free public entry, this attraction is not as famous as the other temples close by.