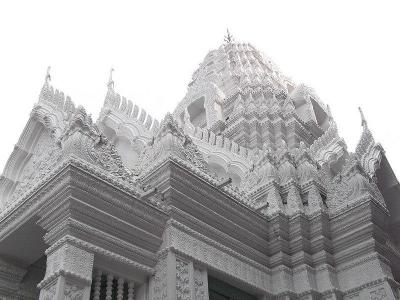 Located to the north of Suan Saranrom, not far from the Grand Palace and Wat Po, Wat Ratchapradit, also known as Wat Rajapradit, is a relatively small Buddhist temple covering a total area of approximately 2 rai. According to an old tradition, three major temples are required to be situated within the capital and, in part, this temple was built to serve this purpose during the reign of King Rama IV, in 1864, for the monks of the Dhammayutika sect.

The central building of Wat Ratchapradit is its viharn, or main chapel, called Phra Vihara Luang. Foundation of the temple had to be reinforced with garlic pots as landfill when, during the construction, it was discovered that the soft soil of the area might cause the building to sink and collapse.

Inside the Phra Vihara Luang are the murals showing royal ceremonies of the calendar year. One of them depicts King Rama IV using a telescope as part of his astronomical studies.

As you pass through the gate, there's a short stairway leading up to a platform supporting the ubosot surrounded by several prangs with a large chedi behind. The inside decor gives an illusion of a checkerboard pattern due to the fact that the ubosot, including its round columns, and the chedi are completely covered in small square tiles of grey and white marble.

On either side of the ubosot are the large prangs with a noticeable Khmer influence. Contrary to the heat outside, inside the ubosot is all dark and cool. The main Buddha image on the altar is backed by a shimmering blue mosaic of mirrors. The ceiling is typically finished in red and gold, with crystalline stars in gold rosettes.

A regular flow of visitors to this little temple suggests that it definitely deserves, albeit a short, visit on your way to the Grand Palace.
Image by กสิณธร ราชโอรส on Wikimedia under Creative Commons License.