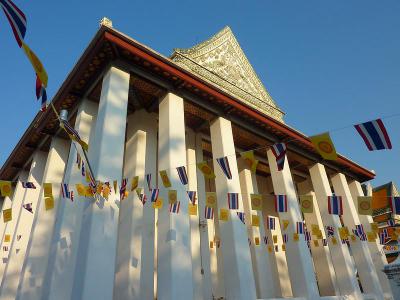 The Wat Thepthidaram temple was built in 1836, by King Rama III, to honor one of his wives. The extreme popularity of all things Chinese at that time preconditioned the distinct Chinese decor of the temple – gables with Chinese porcelain pieces, plus a number of ancient Chinese statues on the grounds.

The main compound of the temple consists of the ordination hall (ubosot) flanked by two prayer halls (wiharns). There is a walled courtyard with corn cob-shaped towers, called prangs, at each corner. The Buddha image inside this courtyard, sat upon a magnificent golden boat-shaped altar, is unusually carved from a snow-white stone. The northern wiharn, with the interesting gilded window frames, is generally closed. The southern wiharn is surrounded by several small pagodas (chedi) and houses another much-venerated Buddha image. In 1977, the Fine Arts Department declared Wat Thepthidaram a national monument.

Still, this temple is primarily famous for its association with Thailand’s greatest poet, Sunthorn Phu, commonly regarded as the “Shakespeare of Thai literature,” who spent three years here as a monk.

In 1986, 131 years after his death, UNESCO honored Sunthorn Phu for his outstanding cultural contribution to mankind and declared him a “Great Personality of the World”. Sadly, some of his unpublished manuscripts, left in the temple, have been destroyed by humidity and pests. In June 2006, the living quarters of Sunthorn Phu, at the rear of the temple's compound, were made into a museum by the initiative of the Silapakorn University of Fine Arts. Called the “House of the Great Poet,” this museum is set to preserve the legacy of Sunthorn Phu for future generations.

Although, regrettably, these days Wat Thepthidaram is not in a very good shape, you shouldn't be detracted from visiting this historic place.