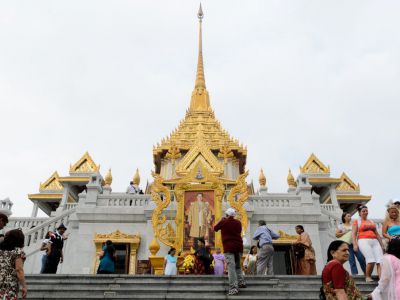 Wat Traimit (Temple of the Golden Buddha), Bangkok (must see)

On the eastern edge of Chinatown, the Wat Traimit Witthayaram is home to the world's largest solid gold Buddha – 3 meters (9.8 ft) tall and weighing 5.5 tonnes – and is consequently known also as the Temple of the Golden Buddha.

Worth millions of dollars at today's gold price, the Golden Buddha was cast sometime in the 13th century and is an excellent example of the gracious Sukhothai style. This statue has such a bright, reflective surface that its edges seem to disappear, and it shines with such richness and purity that everyone is inspired by it. At one point, it was covered in plaster and colored glass – presumably to disguise it from Burmese invaders – and remained like this for nearly two centuries. Only in 1955, when an accident while moving it caused the surface to crack off, was its true nature revealed.

The Golden Buddha is now installed at the highest level of Wat Traimit, with the plaster pieces that once hid it from looters being displayed in a case to the left. The gold, the gems, the mosaic patterns all combine to make a spectacular sight.

Few of the Thai temples also have two quite interesting museums incorporated – this one does! The 2nd-floor exhibits cover the history of Bangkok's Chinese community and the 3rd-floor exhibits allow you to learn more about the story of the Golden Buddha itself.