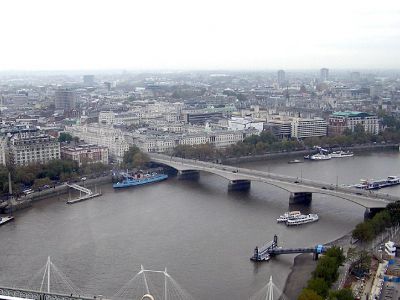 Waterloo Bridge is a road and foot traffic bridge crossing the River Thames in London. The name of the bridge is in memory of the British victory at the Battle of Waterloo in 1815. Thanks to its location at a strategic bend in the river, the views of London from the bridge are widely held to be the finest from any spot at ground level.

The first bridge on the site was opened in 1817 as a toll bridge. From 1884 serious problems were found in the bridge piers. London County Council decided to demolish the bridge and replace it with a new structure. The new crossing was partially opened in 1942 and completed in 1945. The south end of the bridge is the area known as The South Bank.

It is quite usual to see a whole row of professional and amateur photographers lined up on the bridge in the evening when it is clear sky. This bridge offers a 360 degree view of the London skyline and some incredible picture shots both in daylight and night time. If you are lucky enough to be in London on a full moon night, treat yourself an hour on this bridge after sunset to enjoy the spectacular views!
Image by Adrian Pingstone on Wikimedia under Creative Commons License.
Sight description based on wikipedia

Thirty-three bridges span the Thames river in London. Each one has its own history and is worth seeing. This self-guided walk takes you to see nine historical bridges in central London.