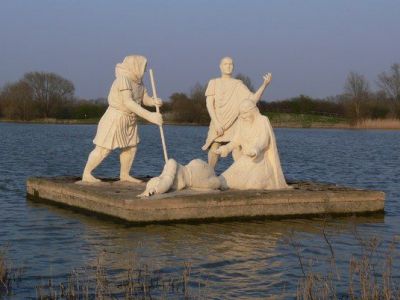 Watermead Country Park is a network of artificial lakes in the valley of the River Soar and the old Grand Union Canal. The parks provide bird watching, fishing and watersports facilities. The northern-most lake is named John Merricks Lake, after the silver Olympic medalist who practiced sailing on the lake. Farther south is King Lear's Lake. A statue on the western side of the lake depicts the final scene of Shakespeare's play King Lear. There are several more artificial lakes to the south. At the southern-most lake, often referred to as Mammoth Lake due to the large statue of a mammoth in the vicinity, you can see Leicester and the surrounding area for some distance in either direction. The Millennium Mammoth was built to commemorate the discovery of Ice Age mammoth remains found when Watermead was a quarry.
Image by Mat Fascione on Wikimedia under Creative Commons License.
Sight description based on wikipedia