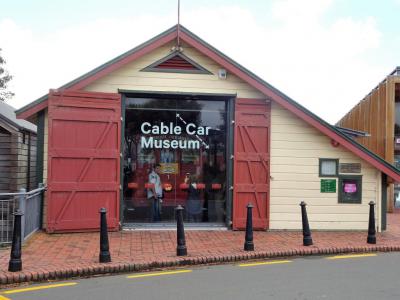 Wellington Cable Car Museum is located in close proximity to the cable car's upper terminus. The museum opened in December 2000. The Cable Car Museum is about the country's only remaining public cable car system with its old machinery, engines, etc. You get to learn about the history of the cable car and ride on-board one of the old cars. There is also a souvenir shop in the museum. it houses original grip cars 1 and 3 and electric winding gear. Car 1 is in red 1970s livery, including contemporary advertising. Car 3 was restored in 2005 to a green livery dating from about 1905, and a bell from the San Francisco Cable Car was added. In the 1980s an original grip car and trailer were placed in the children's playground opposite Salamanca station.

Operation hours: Daily 9.30 am - 5 pm.
Image by Karora on Wikimedia under Creative Commons License.
Sight description based on wikipedia