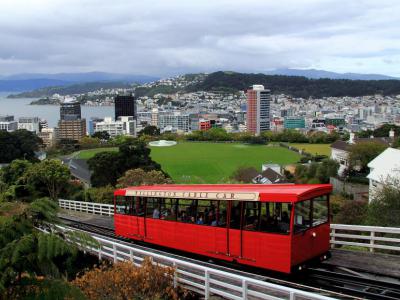 The Wellington Cable Car is a funicular railway between Lambton Quay, the main shopping street, and Kelburn, a suburb in the hills overlooking the central city, rising 120 m (394 ft). The one way trip takes approximately five minutes. It is widely recognized as a symbol of Wellington.

The Cable Car has two cars, which start from opposite ends of the line and pass in the middle. They are attached to each other by a 30-mm diameter cable, supported by 120 rollers, which runs round a pulley at the top of the hill. The Cable Car is a funicular rather than a true cable car: the cars are permanently attached to the cable, which stops and starts as required, while a cable car grips and releases a continuously-moving cable. Wheels on the south side of car 1 and the north side of car 2 have double flanges, while the opposite wheels on each car have no flanges, directing the cars to the correct side of the mid-way passing loop at Talavera.

The cars are designed to fit the grade, using internal steps to provide horizontal floors.

The Cable Car Museum was opened in December 2000. Located in the original winding house, and with a new extension completed in 2006, it houses original grip cars 1 and 3, with the electric winding gear still in working order. Car 1 is in red 1970s livery, including contemporary advertising. Car 3 was restored in 2005 to a green livery dating from about 1905, and a bell from the San Francisco Cable Car was added. The winding gear is still in working order and runs a loop of cable, but the cable no longer leaves the building.

The landmark Kelburn Kiosk was built at the Kelburn terminal in 1905. It was burnt down in a suspicious fire in 1982. The Skyline Restaurant was built to replace it in 1984.