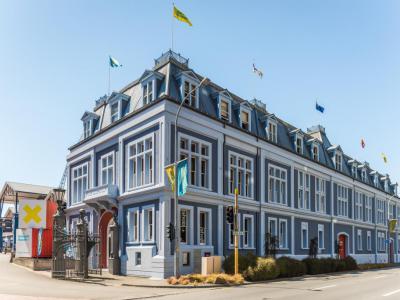 Wellington Museum occupies the Bond Store, a historic building on Jervois Quay on the waterfront of Wellington Harbour. It was commissioned in 1890 by the Wellington Harbour Board to replace wooden buildings from the 1860s, designed by Frederick de Jersey Clere in the French Second Empire style, and completed in 1892.

The building, now known as the Bond Store, is classified as a "Category 1" ("places of 'special or outstanding historical or cultural heritage significance or value'") historic place by Heritage New Zealand

The conversion of this building into a museum building was completed in 1999.

The museum started in 1972 as the Wellington Maritime Museum of the Wellington Harbour Board. In 1989 with the reorganisation of local bodies throughout New Zealand, the Museum was transferred to the Wellington City Council and expanded in scope to include social history of the region. An entire floor of the museum still remains dedicated to Maritime history and culture of Wellington. It is run by the Museums Trust.

The museum has four floors covering the history of Wellington. Celebrating the city's maritime history, early Māori and European settlement, and the growth of the region, the museum seeks to tell Wellington's stories and how the city has evolved over its 150 years as capital of New Zealand. A giant cinema screen stretching between the ground, first and second floors shows a series of films about Wellington.

There are three theatre areas: one tells Māori legends using a pepper's ghost, the other is a memorial to the sinking of the Wahine ferry in Wellington harbour and located on the top floor a Wellington Time Machine. A new exhibition space, The Attic, opened in late 2015 after extensive refurbishment and restoration to the top floor.