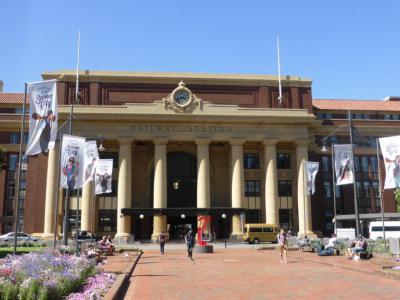 The station was registered on 25 September 1986 as a Category I Historic Place.

In the office entrance to the station, a roll of honour lists 450 members of the New Zealand Railways Department who lost their lives in World War I. (Transcript of the names with links to their records on the Auckland War Memorial Museum's Cenotaph database.) As many as 5,000 of the department's permanent staff, out of a 1914 workforce of 14,000, enlisted during the war, and many casual workers also served.

The roll was unveiled by Prime Minister William Massey in the Railways Department's head office in Featherston St on 30 April 1922. It originally listed 446 names, including two out of alphabetical order at the end, presumably late additions. Four names were added later, including those of three men who died after the war.

When the station opened in 1937, the memorial was moved along the road to its present location.

Wellington railway station featured prominently in the 1981 film Goodbye Pork Pie, in which the protagonists drive a Mini through the station concourse in order to escape pursuing police officers.

The station was used in a 2009 TV advert in the United Kingdom for train ticketing company TheTrainLine, where a large flock of sheep use the facilities.

In May 2014, the station foyer was used by celebrity chef Nigella Lawson to film a commercial for Whittaker's a local chocolate manufacturing firm.
Image Courtesy of Flickr and Stephen Colebourne.
Sight description based on Wikipedia.