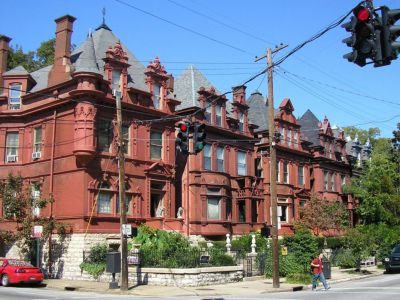 Werne's Row is a row of five nearly identical Chateauesque mansions in the heart of Old Louisville. The houses were built in 1897 for Joseph Werne, a prominent jeweler and antiques dealer, to the design by William J. Dodd, a famous architect of that period. Werne and his wife lived in the house overlooking the corner of 4th & Hill, while Dr. William Wathen resided in the blue house bordering Belgravia Court. The interiors of the houses were designed by Claude Balfour while the exteriors were "intrusted to Mr. F. W. Mowbray, architect", who also designed Union Station (Louisville) at 10th & Broadway in Louisville.

All five homes are very similar in style except for small ornamental details that give each building a personal touch. Although only one foot apart, none of the houses touch, despite the first impression that they may be town homes. A private park for the Wernes existed behind the five houses, it has since become a parking lot for the Belgravia Court Association.

Three of the homes are subdivided into apartments, the other two remain single-family dwellings.
Image Courtesy of Wikimedia and Retired username.
Sight description based on Wikipedia.