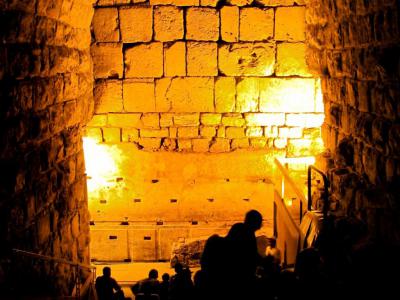 Visitors to Jerusalem can see the relatively small, 200-foot long above ground portion of the Western Wall by going to the Old City near the Al-Aqsa Mosque. They will see the preserved limestone wall built in 19 BCE by Herod the Great.

Those who want to see even more of the wall can head to the tunnels. The Western Wall Tunnel is a 1,601-foot expanse of wall that is entirely hidden underground. It is located under the Old City and much of the Muslim Quarter.

The goal behind erecting the Western Wall was to double the size of the Temple Mount. In 70 CE, the structure was destroyed by Romans. The area that was exposed became a venerated place of prayer, but the rest was built upon and left unseen.

Excavation on the Western Wall Tunnel began in 1864. They continued for about 20 years. The Western Wall Heritage Foundation was formed in the late 19th century with the goal to maintain and renovate the site.

Tip:
If you are claustrophobic, stay calm – some areas are narrow but there are alcoves throughout to provide enough breathing space. Also, in winter, it is quite warm down there, so no need to dress a lot.
Image Courtesy of Flickr and Flavio~.