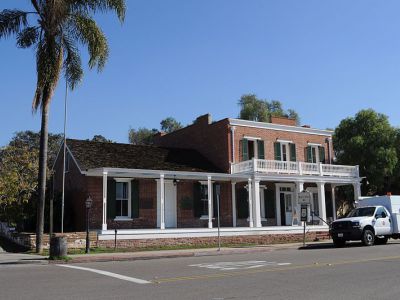 Southern California's first two-story brick structure is quite interesting. A classic example of mid-nineteenth century Greek Revival architecture, it also served as San Diego's first courthouse (1869–1870), commercial theater, and home to Thomas Whaley, who reportedly built it over a graveyard and site of a former gallows. The bricks were made at Whaley's kiln in Old Town, and the walls were finished with plaster made from ground seashells. Now turned into a museum filled with historic artifacts, the house was featured by the Travel Channel as "the number one most haunted house in the United States"; as a matter of fact, it numbers among the 30 houses that were designated by the U.S. Department of Commerce to be haunted.

Tours are self-guided, so you can start anytime after being handed a four-page information sheet that covers the home's history and tells about the ghosts. The history and artifacts are quite enough without the ghost stories, however, mainly due to the local historical society's attention to period detail, which adds a nice touch to each room. Allow thirty minutes to one hour for your tour, and then perhaps a little extra for the lovely (free) rose garden and shady grounds.