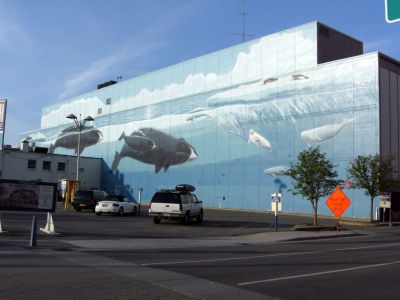 A large outdoor mural depicting several life-size whales was painted on the western wall of the J.C. Penney store building. Its author, Robert Wyland, is famous for decorating walls of buildings all over the world with full-size paintings of marine life. Wyland received invitations from organizations and building owners from all over the world and has painted over 100 Whaling Walls.

The mural on the wall of the J.C. Penney store building is five story high and over 120 meters long. It is the largest and most impressive painted wall mural in Anchorage.
Image Courtesy of Wikimedia and Reywas92.