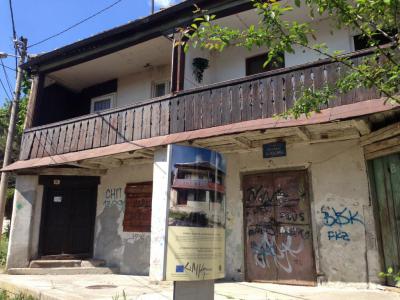 White Bear Tavern (Serbian: Кафана "Бели медвед", romanized: Kafana "Beli medved") is a former kafana in Belgrade, in the municipality of Zemun. First mentioned in 1658, it is the oldest surviving edifice in the territory of modern Belgrade, not counting the Belgrade Fortress.

It is not recorded when the house was built, but it is believed that it originates from the first half of the 17th century. French traveler Michel Quiclet visited Zemun in 1658, then part of the Ottoman Empire. He mentions the house as the largest of three khans in town. The house is also depicted on the 1663 military map of Zemun, made by the German cartographer Heinrich Ottendorf. House is mentioned in 1717, when Prince Eugene of Savoy dwelled in it, preparing for the siege of Belgrade. The object was later named the "Zartaken" and as such appeared on the oldest urban plan of Zemun from 1740.

During the 18th century, the ground floor was turned into kafana. It is not known when and how the kafana got its name. It was originally called only Kod medveda ("Bear's"). The kafana was noted for its cimer, a hanging tin plaque with an image of the standing bear. As the town's house painters gathered in the kafana, celebrating their guild's festivities, they often painted the cimer, changing the color of the bear, into black, grey or white. As they mostly painted it in white, the locale became known as the "White Bear".

The house is the only remaining example of the typical Balkan architecture in the Old Core of Zemun, from the period of Ottoman rule (16–17th century). It is one-storey edifice, built in the bondruk manner, with timber construction filled with unbaked bricks.

A two-forked underground corridor, called lagum, was dug beneath the house. One is 10 m (33 ft) and the other is 14 m (46 ft) long. The walls are laid with bricks. While the house served as the kafana, they were used as a refrigerator. During the winters, when the Danube would freeze, the ice was cut with the saw and brought into the lagum. The food and drinks were kept in the layers of ice and straw. They were called ledenica ("ice room") and were usually allowed to be entered only once a day. As the corridors had good ventilation and a proper temperature, they were used as the wine cellar, too. There are additional lagums around the house. One, which is directly accessible from the living room of the present tenants on the first floor, is used as the larder, since the temperature is constant throughout the year, at 17 °C (63 °F).

The house is placed under the "preliminary protection", but it hasn't been kept by the city or preserved in any way. In February 2020 it was announced that if government provides funds in April, the project of the full reconstruction will be drafted by the Institute for the Cultural Monuments Protection. It is a prerequisite for placing the building under the full legal protection.
Image Courtesy of Wikimedia and Intermedichbo - Dr Milorad Dimić, Serbia.
Sight description based on Wikipedia.

The most beautiful park in Belgrade, Kalemegdan Park, or simply Kalemegdan, is also the largest park and the most important cultural and historical complex in the city. The actual park occupies a smaller portion, in the southern corner, of another, grander monument – the Belgrade Fortress (which is some two millennia older).

The fortress itself, often erroneously referred to, even by the...  view more

Belgrade has been a city of strategic importance for millennia with its location at the confluence of the Sava and Danube rivers. In fact, it is one of the oldest continually inhabited cities on the planet.

Nomadic tribes inhabited the area as far back as 20,000 to 50,000 years ago. Some of these may have been Neanderthals rather than modern humans. By the sixth century BC, the Vinca culture...  view more