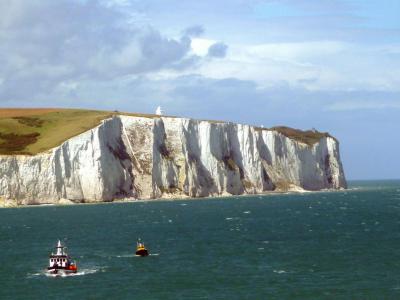 The White Cliffs of Dover are cliffs that form part of the English coastline facing the Strait of Dover and France. The cliffs are part of the North Downs formation. The cliff face, which reaches up to 350 feet (110 m), owes its striking appearance to its composition of chalk accentuated by streaks of black flint.

The cliffs have great symbolic value in Britain because they face towards continental Europe across the narrowest part of the English Channel, where invasions have historically threatened and against which the cliffs form a symbolic guard. The National Trust calls the cliffs "an icon of Britain", with "the white chalk face a symbol of home and war time defence."
Image by Mark Hoogenboom on Flickr under Creative Commons License.
Sight description based on wikipedia

This sight is featured in a self-guided walking tour of Dover, England within the mobile app "GPSmyCity: Walks in 1K+ Cities" which can be downloaded from iTunes App Store or Google Play. Please download the app to your mobile phone or tablet for travel directions for visiting this sight. The app turns your mobile device to a personal tour guide and it works offline, so no data plan is needed when traveling abroad.